Port-Bail, on the west coast of the Cotentin Peninsula, is a small port with anchorage moorings and walk-ways sheltered from prevailing winds. Accessible from the sea via a well marked-out channel, the port is an integral part of an immense harbour in an environment rich in history, culture and natural beauty.

The close proximity of the Channel Islands of Jersey, guernsey and Sark make Port-Bail an ideal point of departure for pleasure craft. The archipelagos of Les Écréhou and Les Minquiers, small islands of rock, many of which are hidden when
the tide rises, are also opposite Port-Bail and well worth a visit.

The Church of Notre Dame, built in the 12th century, has been transformed into a cultural centre and now hosts a variety of temporary exhibitions of paintings and sculptures by internationally renowned artists.

The remains of another building, confirmed to be an early Christian Baptistry, have recently been uncovered. Built in the 6th century, this baptistry, which is fed by a natural spring, is the only one of its kind to have been found north of the Loire. 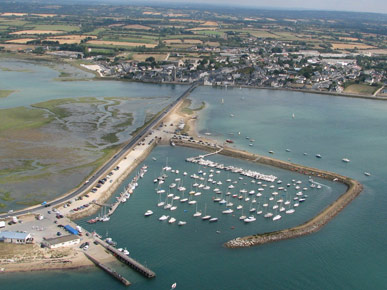